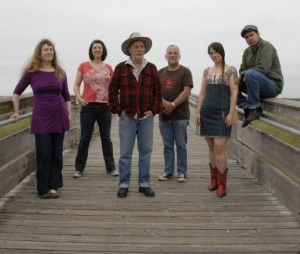 LYRICS
We were drinkin’ down at Mary Todds’
With an old man named Pops
He said, It’s easy to go downhill in this here town
When I was born in ’24
You could roar right up to the door
You could catch your fish and drink another round

Say Pops, what work did you do?
Well, I used I used to print the daily news
And for four years I fought an epic war
The young kids now they just fight (?)
And it’s clean it up for the upper crust
Let’s make this town safe for outlet stores

The canneries have all shut down
The papers call it the new (?) town
See the coffee shops and cruise ships by the pier
The tourists tour historic homes
While sipping lattes with extra foam
And the captain’s post is hawking souvenirs

Had enough, says the old red Finn
Beer and jokes and union pins
Can’t compete with fancy wineries
Someday soon it’ll be last call
An’ I’ll sell the stools to the antique mall
And build a bed and breakfast by the sea