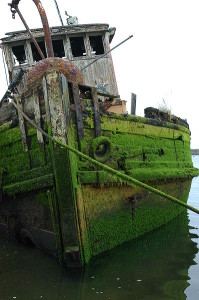 Mary D. Hume of the sea
Built of white cedar in the harbor of Gold Beach
Set out to sail for Arctic whale
Late in the winter of 1881

Mary D. Hume before spring
Married 10 sailors to the cold icy sea
Kept them aboard through icy storms
Covered in white for the ocean’s wooden bride

Mary D. Hume and the whale
Chasing like Ahab in the cold Arctic gales
Caught the baleen, the saint of the deep
Deep in the waters of Pacific Northwest seas

Mary D. Hume came home
Bought up and used as a harbor tug boat
But times had changed since her glory days
40 years at sea made her hull creak like old bones

Mary D. Hume finally sank
10 feet away from where she was made
But ghosts all aboard still watch from her doors
I look where they stood where barnacles grow today

“I wrote this song when I was 20. My Irish band and I were on a road trip when we passed through Gold Beach, Oregon, a place of significance for me as it is the emptying bay of the Rogue River, which I grew up on. Nestled in the loam just feet away from the shore was the remains of the Mary D Hume. Enchanted, I gathered as much information as I could from the nearby museum, went back to my campsite, and wrote this song in one sitting. Everything in the song is true to the boat’s history. At 100 years at sea, the Mary D Hume was the longest-serving commercial ship in West Coast history. She also had the highest number of on-board fatalities, and she really did sink just feet from her original shipyard, where she currently lists in the mud, covered in moss, and is an historic landmark.”

Here’s an article about the Mary D. Hume in the Mail Tribune.

You can read another short article here.

You can see photos of the Mary D. Hume here and on Flickr.