For the lyrics, visit the Folkways web site for the original recording by the songwriter, Stanley G. Triggs. 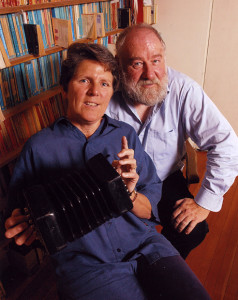 This song was written by Stanley G. Triggs, who worked as a deckhand on British Columbia tugboats in the late 1950s. According to the liner notes for his Folkways album, ‘Bunkhouse and Forecastle Songs of the Northwest’, the Oda G was the name of a real tugboat that he worked on, at that time one of the oldest on the coast. He made up the song while painting the bulwarks, as in the song.

There are a couple of articles about Stanley G. Triggs from the Canadian Folk Music Bulletin here and here. He is retired and lives in Quebec, after a long career as curator of the Notman Photographic Archives, McCord Museum.

Some notes about the lyrics:

That was also the year that the Arthur Foss was built.

The fantail is the extreme aft (back) of the boat. On a tugboat, the aft deck is low to the water, to allow a clear run for the towlines to the winch. The fantail would be a quiet place to read, being as far as you can get on a tugboat from the sound of the engines (and the engineer’s job).

Tugboats have a narrow ledge, just wide enough to stand on, around the outside of the bulwarks (the solid ‘railing’ around the outside of the boat). I don’t know what this ledge is called, but I have stood on it to paint the bulwarks. You can do this by leaning sideways rather than forward to paint. You must constantly resist the impulse to take a step back to paint the way you would normally, because there is nothing behind you but air and water.

The word ‘chuck’, meaning water, is heard only in the Northwest. It comes from the Chinook jargon used in early trading.

This cheerful song is a piece of black humor that makes light of the very real dangers of working on a tugboat. Such lines as ‘He ran out of luck when he fell in the chuck with a rusty old boom chain wrapped round his left arm’ can still have a chilling effect in spite of the jaunty tune.

Jon Bartlett and Rika Ruebsaat, who recorded this song, are collectors and performers of songs, particularly traditional Canadian songs. They have recorded several CDs.