Tugboats Pullin’ on the Bridge Lines 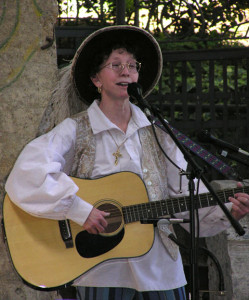 Goin’ down it cut twelve cables
Now the new bridge was unstable
Someone made a Mayday call
Help us or the bridge will fall
Crowley, Fremont, Big Claw, Foss
Sailed out to prevent the loss
Shot their lines and tied ‘em tight

Now they chug there day and night
And people cheered as they sailed by
With coffee and doughnuts, cherry pie
Thanking victorious Puget Sound tugs
Saving our bridges, chugga-chugga-chug
To hold that bridge they stayed in place
All lined up, just like a race
Goin’ nowhere day and night
Standing still they won the fight

This song was written and sung by Wendy Joseph. She is works as an ABS (Able Bodied Seaman) on large commercial vessels, and sends out an interesting log about her experiences. If you would like to read her reports, email us at info@maritimefolknet.org and ask to be put on the email list for Wendy’s Sea Log.

Before the construction of a highway system in Western Washington, much of the transportation of people and goods was done by water. With the advent of the automobile, all that water became an obstacle. The Northwest’s solution: the ferry system, and floating bridges.

The City of Seattle is bordered on the east by Lake Washington – too long to drive around, too wide and deep for conventional bridges. On the west side, Seattle. On the eastside, bedroom communities and newer industries like Microsoft. Lake Washington is crossed by floating bridges in two places, carrying two major highways: State Route 520, and Interstate 90. I-90 ends its over 3000 mile coast-to-coast trek where it intersects I-5, shortly after crossing the floating bridge, which is well over a mile long.

You can see a photo of the I-90 floating bridges here.

By the late 1980s, the I-90 bridge had become a bottleneck for traffic. The State government determined to build a new floating bridge next to the old one, and then renovate the old bridge. This would more than double the amount of traffic that could cross. The new bridge was finished in 1989, and the old bridge closed for renovation on the road surface.

In November 1990, I was leaving Seattle on the Greyhound bus to visit my family. As I crossed Lake Washington headed east on the new bridge, I had a good view of the old bridge from the high bus windows. I noticed a number of gaping holes in the bridge pontoons, not far above the water line. Not knowing much of nautical matters at that time, I just muttered, “I hope they know what they’re doing.” They didn’t.

The construction crews had removed the watertight doors on the pontoons. Then the crews went home for the long holiday weekend. As a windstorm came up, waves put water into the center pontoon, which sank, dragging most of the other pontoons down with it, as each pontoon filled with water through the open doors.

What happened next is recounted in Wendy’s song – when the old bridge went down, it cut twelve cables on the new bridge. Tugboats were called in to replace the tension that the cables had provided, until repairs could be made. There is a ship canal from Puget Sound to Lake Washington, which allowed the tugboats to respond. The old bridge was pretty much a total loss, and had to be totally rebuilt, but the new bridge was saved.

Of the tugboat companies named in the song, Crowley and Foss are giants on the West Coast. Fremont Tugboat Company is based in Lake Union, situated along the Ship Canal between Puget Sound and Lake Washington. Wendy has somewhat mythologized Big Claw Maritime by including them here, since they didn’t form until the late 1990’s.

You can read about the disaster at History Link and KUOW. This is not the first time that a Northwest floating bridge sank. The Hood Canal bridge sank in a windstorm in 1979. Pontoon hatch covers were left open in that case as well.