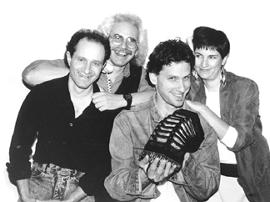 She’s a jackpot tug and her hull is wood
The runs are short and the coffee’s good
She don’t make the news like the Sudbury
But she’s right by the mate and the skipper and me,
By the skipper and me, she’s the best boat since the Beaver

You see three suns as a tugboat man,
The sun in the sky that they know on land
The sun in the water that the sailors see
And the sun in the wheelhouse brass, that’s three,
And a jack is four, and a three-card run makes seven.

When the tugboat days are done
I’ll join the Beaver on her run
Yardin’ the stars when they drift away
And towin’ the sun on a golden chain,
On a silver line, drinking cups of coffee.

This classic song was written by Bob Bossin and recorded about 1977 by Stringband, of which he was a founding member. Stringband was a leader in introducing Canadian content into contemporary songs. You can read more on Bob Bossin’s web site.

The famous maritime songwriter and performer, the late Stan Rogers, was a guest vocalist on this recording. He sings what has been described as ‘the verse with all the swearing in it’. It was reported on Mudcat that this was the first time Stan Rogers was recorded, but this is not yet verified.

I confess I’m not familiar with the term ‘jackpot tug’, but ‘jackpot’ is logging slang for a messy pile of logs, especially if logs are floating in a tangled mass that extends below the surface of the water.

‘Her hull is wood’

The Sudbury was a salvage tug famous on the West Coast in the 1950s and 60s for dramatic rescue operations.

‘She’s the best boat since the Beaver’

The Beaver was the first steamship on Northwest waters. She was a sidewheel steamer, and was used for towing in the latter part of her career.

The Straight of Georgia separates Vancouver Island from the mainland of British Columbia.

Towboats: In most of North America, a ‘towboat’ is what might be called a ‘pusher tug’ in the Northwest. These are primarily river craft, and they push barges rather than tow them. (Originally, the barges were towed rather than pushed, and the name stuck with the vessels.) In the Northwest, ‘tugboat’ and ‘towboat’ are often used interchangeably.

‘Towin’ the sun on a golden chain, On a silver line, drinking cups of coffee.”

What wouldthe afterlife be without tugboats and coffee? Apollo’s team and golden chariot have been replaced by a tugboat.

‘Prince Rupert down to Flattery’

Prince Rupert is a port city at the northern end of the British Columbia coastline. Cape Flattery is the most northwestern point in the continental U.S., at the western end of the Straight of Juan de Fuca. The border between the U.S. and Canada goes down the middle of the Straight of Juan de Fuca. So ‘Prince Rupert down to Flattery’ takes in the full extent of West Coast Canadian waters.