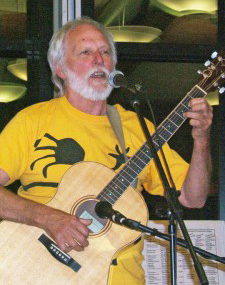 LYRICS
The J.C. Cousins was her name a 2 masted schooner sleek
built in Frisco in 81 of finest hardwood and teak
Sold in March of that same year to men of Astoria far
For 2 whole years she plied her trade as a guide o’er Colombia’s bar.

Some have said she struck the bar and her crew took flight and fled
But never a body washed up on shore, not one living or dead
Others have said that Zeber the mate was hired by rival Flavel
To kill his shipmates and disappear to reap his reward in hell.

As out and over the bar she steered her course was straight and true
Then back she sailed on the evening tide with never a trace of crew
No light winked in her wheelhouse fine, no smoke from her cookhouse came
Though her helm was steady off Clatsop Spit she was hailed many times in vain.

A grizzled old man on the waterfront said ‘Tis real I tell you true
A ship of the dead what sails the sea with none but a ghostly crew
In the tempest blast she often appears before or agin the gale
Without a helmsmen at her wheel she makes way without ___ of sail.

Whether by act of man or god or monster of the sea
No whit of evidence ever was found which yielded up the key
For the ocean holds its secrets deep the sands give little more
And the J.C. Cousins still is seen ghosting over Columbia’s bar.

J.C. Cousins tells the tale of a ghost ship on the Columbia River bar.