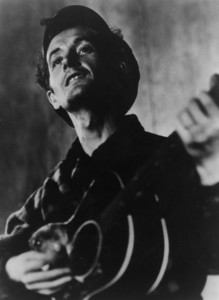 LYRICS
Green Douglas firs where the waters cut through.
Down her wild mountains and canyons she flew.
Canadian Northwest to the ocean so blue,
Roll on, Columbia, roll on!

Other great rivers add power to you,
Yakima, Snake, and the Klickitat, too,
Sandy, Willamette, and Hood River, too;
Roll on, Columbia, roll on!

Tom Jefferson’s vision would not let him rest,
An empire he saw in the Pacific Northwest.
Sent Lewis and Clark and they did the rest;
Roll on, Columbia, roll on!

At Bonneville now there are ships in the locks,
The waters have risen and cleared all the rocks,
Ship loads of plenty will steam past the docks,
Roll on, Columbia, roll On!

And up on the river is Grand Coulee Dam
The mightiest thing built by our human hands
To run the great factories and water the land
Roll on, Columbia, roll on

These mighty ones labored by day and by night
Matching their strength ‘gainst the river’s wild flight
Through rapids and falls, they won the hard fight
Roll on, Columbia, roll on

Roll On, Columbia is the most popular of the 26 songs that Woody Guthrie wrote for the Bonneville Power Administration in 1941. It was designated the official folk song of Washington State in 1987.

It can be found on the CD “Columbia River Collection”, which has recordings by Woody Guthrie of 17 of the songs he wrote for the BPA. It has been recorded by many others, including Pete Seeger. A version by Hank Cramer can be found on the CD “Tales from the Bar: Songs of the Lower Columbia River”, as well as on Hank’s CD “Songs from Maurie’s Porch”.

Woody credited the melody to his friend Huddie Ledbetter (Lead Belly), when someone pointed out a resemblance to Goodnight, Irene. If the melody is derived from this song, it has been considerably modified.

Other verses, about wars with the Indians, are not often sung these days. One verse mentions the Lewis & Clark expedition of 1804-1806, another some of the tributaries of the Columbia.