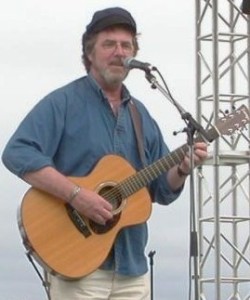 Skipper didn’t turn aside
He had to make the mill by daylight
In the morning a gale began to blow
Cut the tow, it’s a heavy swell!
The skipper growled I’ll see you in hell
The cook hid in his bunk down below.

Against the storm the tugboat strained
Against the wind and the driving rain
Til the engineer to the skipper cried
You’ll kill us all you damned old fool!
I ain’t gonna die just to suit you!
And with that he jumped right over the side

In Everett town they heard that day
Above the cry of the wind and the spray
The boiler of the tug give its last
The logs of the tow lay on the shore
But the skipper and his tug, they saw no more
Blown to Hell by the boiler’s blast

This song was written and sung by Matthew Moeller. Matthew has written quite a few songs about Northwest maritime history, including songs about crimps, railroads, and geoducks.

The fact that the tug in this song has a boiler means it was a steam tug. This sets the era somewhere between the 1850s and the 1960s. After about 1950 all new tugs were diesel powered, but some steam-powered tugs continued in service into the 1960s.

You can generally tell a steam tug from a diesel tug by the height of the stack (the funnel). A steam tug will have a taller stack.

The difference between a log boom and a raft of logs: In practice, both these terms are used for logs chained together for towing. (You can find a link to some good photos in the notes for Tall Trees.) Originally a log boom was a barrier across a river to catch logs that came floating down. Assembling logs for towing is called booming. ‘Log boom’ is sometimes used to refer to the resulting tow, which could also be called a ‘log raft’.

Cape Flattery is the most northwestern point of the continental U.S., at the south side of the entrance from the ocean into the Strait of Juan de Fuca. The area is renowned for bad weather and shipwrecks. Everett is a mid-sized city on the east side of Puget Sound, about an hour north of Seattle by car.