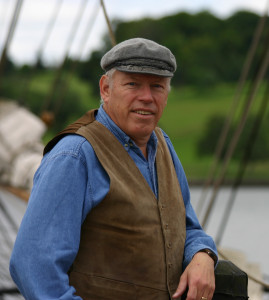 It’s one more pull, and we’ll be gone
One more shift, we’re going home
We’ve been three weeks on MARIAH tug
And we’re all Vancouver bound

We left Vancouver, Frisco bound,
Behind us we’ve two loaded scows.
We turn around and we head with ease
Into Alaskan seas.
Our engines roaring, loud and strong,
Six thousand horses, hauling tow,
We take on the Pacific gales
As northward we do go.

There’s lots of work for all to do
On a West Coast tug when she’s out at sea.
The deck apes keep our line in tow,
And Piggy makes the food.
Black gangers keep our engine tuned
As we pull across the stormy brine.
And the skipper steers a course that’s true
So we’ve a safe return.

It’s been three weeks since I’ve been home,
And I wonder if the kids have grown.
It’s a long and lonely life at sea
When you’re on this West Coast run.
What sailors’ yarns I’ll have to spin
Of an epic voyage, and where we’ve been.
“Oh tell us, won’t you please, Daddy,
A story from the sea!”

So I’ll sit the kids beside the fire,
And I’ll sing of storms and of snapping wires,
And waves as big as any house,
And about the tugboat’s mouse.
I’ll sing of whales, and mighty gales,
And trees so high they touch the sky,
And how we drag them out to sea,
And how it used to be.

It’s Juan de Fuca to Georgia Straight,
On the river now, let’s not be late.
We’ve ten days off, and it won’t seem long
Till we’re on the job once more.
And though the work is hard and the hours are tough,
And you’re wet and you’re cold when the sea is rough…
But the money’s good, so damn the hours!
It’s a sailor’s life for me!

This song was written by Geoff Noble, and is an evocative description of life on a West Coast tug.

One of several songs by Canadian songwriters included on this CD, ‘One More Pull’ exhibits the broad range of West Coast seagoing tugs: BC to California, then back to Alaska, and home again to Vancouver, BC. Some trips might range as far as Hawaii or other Pacific islands.

“It’s Juan de Fuca to Georgia Straight,
On the river now, let’s not be late.”

‘Deck apes’ are deckhands, and ‘blackgangers’ are the engine room crew. Obviously, these nautical terms pre-date the political correctness movement.

I was going to try to list tugboat companies that operate ocean-going tugs out of Vancouver, BC, but discovered there are too many to list. If you want to find more information online about tugboats, try searching for ‘marine towing’ (and the name of a port city if you want to limit your search). Most of these websites are geared towards someone who actually wants something towed, but many sites have photo galleries of their tugs, or a history of their company.

This song was also recorded by Hank Cramer when he was a member of The Cutters, on the ‘Live Aboard Wawona’ album. Chris Glanister chose the studio version from Hank’s solo album, ‘The Road Rolls On’, for its higher production values, but the live Cutters album is also recommended as a great collection of songs.

Hank Cramer has recorded a slew of CDs, all of which are recommended. He is probably the Northwest’s most prolific recorder of maritime songs. If you are mainly interested in maritime music, check the song lists on his CDs before buying, because he also records collections of cowboy songs while wearing his other hat.