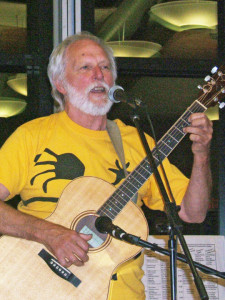 Piper Cameron is about a 26- year-old deckhand, Piper Inness Cameron, who was killed in a tragic accident aboard the tug Emma Foss, and about the tugboat named after her, the Piper Inness. You can read her story in TowBitts and Professional Mariner.

Piper Cameron was only 41 work days away from earning her Master’s License, which would have enabled her to fulfill her dream of becoming a tugboat captain, like her father before her. Her death caused a re-examination of safety standards, as ships, tugs and equipment have all become larger and more dangerous. You can more about her story here.

Although most Foss tugs are named after family members, descendants of Thea Foss, Foss Maritime made an exception and renamed one of their tugs Piper Inness. Cameron had served as mate on the boat, and would have served the tug as captain once she got her license.

Jon Pfaff won third prize at Seattle Maritime Festival’s annual Stories of the Sea contest for his performance of this song.

The lyrics for the song were written by Mary Garvey, and the tune was written by Jon Pfaff. Jon also gets co-credit for the lyrics, because he tweaked the words to fit the tune and his perception of the song. Mary had conceived this as a drinking song, but Jon saw it more as a lyrical tribute. Still, when Jon sang the song at the Fisher Poets Competition, you could see glasses raised in tribute all over the pub. Perhaps they are both right.