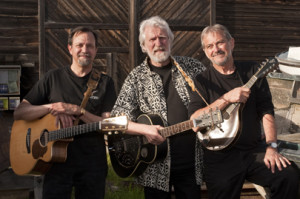 Got a halibut-boat, the opening is over,
The fish just weren’t biting, our catch is way down,
We’re salvagers now, there’s logs waiting,
We just go snatch them off shore and we sell them in town. (and we …)

She’s a six-foot thick hemlock half-sunken in sand,
Gotta’ dig out a hole to pass the line through,
Wrap her around; when she’s tight and ready,
Then stand clear away while you signal the crew. (to …)

And it’s thirty-six hours we’ve been without sleep,
Got to boom them by dawn if we’re making this tide,
It’s a five hour haul, with a Nor’Wester blowing,
And a starboard-side swell for a bloody rough ride. (so … )

And our back-desk’s a mess of anchors and peaveys,
All sliding and tangled in cables and chain,
We’re in the middle with pike poles and chokers,
To wrap the logs tight, so they’re not lost again. (and we … )

How many thousands of acres of forest,
Lie scattered and heaped by the wind and the tide?
The companies cut them; boomed them and lost them,
Then left them forever to rot where they lie. (but we … )

Yes, we know this song is not actually about a tugboat, but it is about towing, and we like it so much we included it. It’s about using a fishing boat for salvaging logs. Tugs that are towing log booms sometimes lose a few logs, and these may wash up on shore. (Or a log may stay floating, partially submerged. This is called a deadhead, and is a hazard to navigation.)

The song was written by Vic Bell, and is a true story about his experiences on the Queen Charlotte Islands in northern British Columbia. The Victoria Nautical Song Circle gives the story behind the song here, directly as Vic Bell told it.

Although this song was written about BC, the Western Hemlock is the Washington State Tree, showing another similarity between the coasts of Washington and British Columbia.

Cedar and hemlock are the trees mentioned on this CD, but the tree most frequently cut for lumber in the Northwest is the Douglas Fir. Most of the old wooden-hulled tugboats in the Northwest (like the Arthur Foss) were built of Douglas Fir. Although classed as a soft wood, the old-growth Douglas Fir was very dense, and the wood got harder with age. Some of these old wooden hulls have endured for over a century.

A peavey is a hand tool used for moving logs.

You can see some photos of log booms on the History Link site. There’s also a photo on the Fraser Basin website.