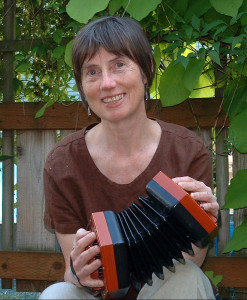 For the lyrics to Summer Wages, we suggest that you search on the internet for ‘lyrics Summer Wages Ian Tyson’.

Note that unlike some versions you may see, Chris Roe’s version has “grey fog-bound straights where the cedars stand watching”, “the hustlers standing watchfully as they wait there by the door”, “Which I swore I would never do again”.

This song is performed by Chris Roe, with a muted unison chorus of eight others. This is the most well-known song on the CD, but Chris Roe’s unusual voice gives it a fresh interpretation. There is something about her voice that is honest and sincere, generally somewhat low-pitched but rising unexpectedly with highlights of pristine clarity.

The song was written by Ian Tyson and was first released by Ian and Sylvia in 1967. It is a tribute to the subtlety of Ian Tyson’s songwriting that while everyone likes this song, they may not agree on the story that is told.

Whatever the song is about, it is certainly about tugboats:

‘So I’ll work on the towboats in my slippery city shoes,
which I swore I would never do again,
through the grey fog-bound straights, where the cedars stand watching —‘

Here’s my guess at what the story is, reading between the lines:

This is a guy with more problems than just his shoes. He left home for a summer job, probably as a logger, and probably in northern BC, although it could have been Washington, Oregon, or California. He might even have been hoping to make a big stash with high-paid summer work so he could get married. Then after working all summer, he had one last night in town, and gambled away everything he had (even his workboots, or he had already sold them). So he has no money to get back to Vancouver, and is working his way home as a deckhand on the towboats. It’s taking a long time to get home as they work short runs through every little fog-bound strait along the coast. He has no way to communicate with his girlfriend (he’s far off and gone). He’s been away months longer than he promised, and he’s coming home broke. Will she still be waiting when he finally gets back to Vancouver, whenever that is? Some of his friends always had their eyes on her……

The chorus seems to me to compare the stands of timber ‘just waiting for falling’ to the tall young loggers coming to town with their money, with the hustlers eyeing them as a potential crop headed for a different kind of fall.

This is a highly personal interpretation, and I was surprised to learn that some people have completely different ideas. One person saw this as a cheerful song, that the protagonist has reformed and gone into a healthier lifestyle, working on tugboats. This interpretation might depend on how you feel about the line ‘through the grey fog-bound straits, where the cedars stand watching’. Some people would find this a gloomy description, but others love the foggy, forested West Coast and think there could be no finer scenery.

Ian Tyson reworked this song several times, and recorded it more than once. At one point he wrote an extremely pessimistic fourth verse:

“She’s a woman so fine, I might never try to find her
For good memories are all we had before
And they can never ever be changed, for they’re all that I’ll take with me
Now I’ve gambled and lost my summer wages”

This verse is not included in the version on this CD, and not everyone likes it. I personally prefer the shorter version as Chris Roe sings it, which leaves the ending open and the questions unanswered.