The Arthur Foss Leaves the Dock 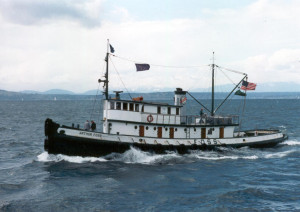 What you are hearing is the historic 1889 tugboat Arthur Foss, the same vessel that is the subject of ‘A Hundred Years Ago’, sung by Bob Kotta and Mariide earlier on this CD. The Arthur Foss is owned by the non-profit organization Northwest Seaport.

This track was recorded by Chris Glanister, with the help of Adrian Lipp, owner of Old Tacoma Marine, specializing in the maintenance of heavy-duty diesel engines.

Three short blasts on the horn is the signal for backing. (Since the Arthur Foss is leaving the dock, the signal should be one long blast followed by three short blasts.) The horn operates with compressed air, using the same air supply used to start the engine. 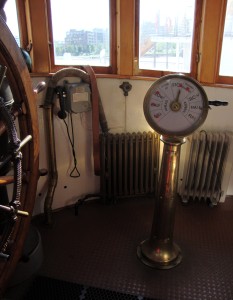 Next you hear the engine start, useing compressed air. Because this is a large, old engine that runs at slow speed with a long stroke, you can hear each of the six cylinders. 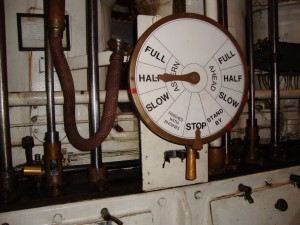 The engine is a 700 hp Washington diesel engine, installed in 1934, when the Arthur Foss was converted from steam to diesel. The engine was manufactured by Washington Iron Works, a Seattle-based company that also built logging equipment. At the time the engine was installed, it made the Arthur Foss one of the most powerful tugboats on the West Coast. (By contrast, a modern ocean-going tug might have an engine of 7000 hp or more.)

You can read more about the Arthur Foss engine at the Old Tacoma Marine site.

The skipper has to plan docking maneuvers carefully, because if there are too many stops and starts, the compressed air, stored in tanks, will be used up, leaving the vessel drifting, possibly on a collision course. There are no brakes; the only way to stop the motion of the boat is to reverse the engine.

In this case the skipper backs out perfectly, using only one start to change to a forward direction.