For the lyrics, visit the Folkways web site for the original recording by the songwriter, Inge Wessels. 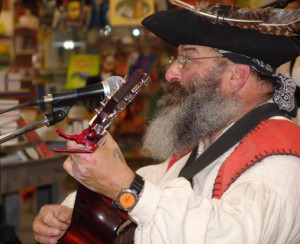 This song was written in 1979 by Inge Wessels about her experiences as a tugboat cook on Puget Sound and BC waters, and recorded on the 1981 Folkways record ‘Sea Music of Many Lands: The Pacific Heritage’. On the Smithsonian Folkways site, you can hear an audio sample of Inge singing her song.

You can read Inge Wessels’ notes about the song at the Folkways web site.

Inge Wessels moved to San Franciso, where she recorded this song. She was well known on the waterfront for many years as a puppeteer. Sadly, she passed away in April 2010, shortly before we decided to record her song for this CD.

We really wanted to record Tugboat Bromberg for this CD, since on account of his nickname, the CD would be incomplete without him. Due to the shortage of tugboat songs, Chris was having trouble finding a song for him, until Mary Garvey located this gem, which is better known in the Bay area than it is in the Northwest. Tugboat Bromberg was initially reluctant to take on the song, since his voice and singing style could not be farther from that of Inge Wessels. He was persuaded by Chris Glanister to give it a try, and he has succeeded brilliantly in creating his own version of the song.